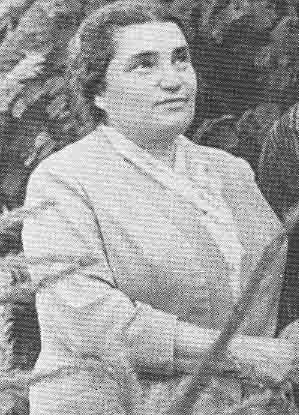 Evgeniia Semonovna Ginzburg was born on December 20, 1904 and died on May 25, 1977. Her memoirs of the Soviet camp system are both historically informative and of considerable literary value. Though they circulated for many years in "Samizdat" (undergound, often handwritten or typewritten form) in the Soviet Union, and were published abroad in several different languages, they were not published in the USSR until 1989. (Journey into the Whirlwind, which I keep misnaming "Into the Whirlwind," first appeared in English in Paul Stevenson and Max Hayward's translation in 1967; the second volume, translated as Within the Whirlwind, came out in Ian Boland's translation in 1981.) Ginzburg is also of note as the mother of author Vasilii Aksyonov, who was exiled from the Soviet Union in 1980. His partly-autobiographical and partly-fantastic novel, The Burn, includes some passages about her. (Aksyonov was originally educated as a doctor largely on his mother's advice -- she told him to do something useful.)

Ginzburg was born and raised in a Jewish family in Moscow; her father was a pharmacist. She became a teacher and moved to the city of Kazan', where she taught and also worked as a party activist. Her husband, Pavel Aksyonov, was a highly placed member of the Communist Party; he was arrested shortly after she was. The older of their two sons, Alyosha, died in the siege of Leningrad during the Second World War; the younger son, Vasilii, reentered her life already as a young man. Ginzburg was first arrested in 1937; after prison, she was sent to a labor camp in Kolyma, where she worked as a nurse. There she met her second husband, Dr. Anton Walter, a Crimean German convict who worked off his sentence as a doctor in the camps. (A number of ethnic groups in the Soviet Union were subject to arrest or even to mass deportation simply for belonging to that group, or perhaps for residing in overly desirable territory.) Ginzburg's sentence ended in 1947 but she remained in Magadan to be near Walter; in 1949 she was arrested again and was not allowed to return to Moscow until 1955, two years after Stalin's death on March 5, 1953. In Moscow, Ginzburg began to publish her writings, and she even managed to publish two short memoirs and a novella, but she was not allowed to join the writers' union. She died in 1977, before either volume of the memoirs that were her greatest achievement as a writer could be published in her own country.

The best source on Ginzburg's life in prison, the camps, and exile is of course her own memoir. The first volume tends to be somewhat less uncompromising in its tone, since the "thaw" in Soviet culture in the early 1960s, and especially events such as the publication of Solzhenitsyn's "One Day in the Life of Ivan Denisovich" in the journal Novyj Mir in 1962 gave her hope that she might be able to publish the work. By the time she wrote the second volume, she had no illusions and so was considerably more frank. As Adele Barker notes, "She is harder on Lenin here, on the party, and on the collective mind-set that made the existence of the gulag possible. As Barbara Heldt has noted [in Terrible Perfection -- SF], she also retreats further into her emotional world, where her notion of self, in line with that of the traditional Rusian heroine, is defined through her ability to give of that self" (Barker, p. 206).

The two volumes of memoirs are entitled in Russian simply Krutoi marshrut I and Krutoi marshrut II -- "Harsh Route" or "Steep Route." The Whirlwind references are certainly rich, but they were added for the English translation.

1. Ginzburg was an enthusiastic communist until, and even after, her arrest. How would you chart her growing awareness of the Terror in her country, and how does this change in consciousness influence her writing and her evaluation of her own life and behavior?

2. Ginaburg spent two years in solitary confinement, and her memoir suggests that this experience, for all its painful aspects, had a purifying effect on her and on the other prisoners. Hoe does this compare to other stories you have heard about prison -- then and now, in the USA or elsewhere?

3. Where does she use common human experiences or even somewhat sentimental clichés to move her reader or make him or her more aware of her own or her characters' emotions? How does this work for you as a reader?

4. Ginzburg, when asked how she could remember the hundreds of names, places and facts over an 18-year period, replied that it was simple since for the whole 18 years remembering everything had been her main object. As Olga Cooke notes, "Ginzburg was motivated by the responsibilites of a survivor to bear witness" (Cooke, p. 321). What sense of self do you get from reading this book, and how does Ginzburg's image or definition of herself contribute to her moral and physical survival?

5. What is the role of poetry, and of Russian literature as a whole, in this book?

6. What is the role of humor in Ginzburg's memoir? What does it provide to her, and what to the reader?

7. What does a reader learn from this book, aside from plain (though shocking) historical fact?

8. Of course this is a memoir, not a novel, but where do you see an aesthetic sense shaping the way that facts are presented?

If you enjoyed this book and you're interested in more information about the Soviet camps, I can't say you'd enjoy these other books, but you'll surely profit from them. Aleksandr Solzhenitsyn's GULag Archipelago remains an unexampled source for its record of oral history of the prison and camp experience; the three thick volumes of the original edition are now available in a thoughtfully-edited single-volume abridgment. A more literary treatment of the same far Eastern landscape described in Ginzburg's second volume of memoirs, Within the Whilrwind, is Varlam Shalamov's Kolyma Tales, available with other stories in John Glad's translation from Penguin. Finally, an often heart-breaking but very rich collection of women's memoirs of the camps is available in English translation: Till My Tale Is Told: Women's Memoirs of the Gulag, ed. Simeon Vilensky, various translators (Bloomington and Indianapolis: Indiana University Press, 1999). A selection from Ginzburg's memoirs was included in the original Russian edition but left out of the English version since Ginzburg is available in translation -- with luck, her two volumes will be back in print and easily available again.

A select bibliography on Ginzburg in English: